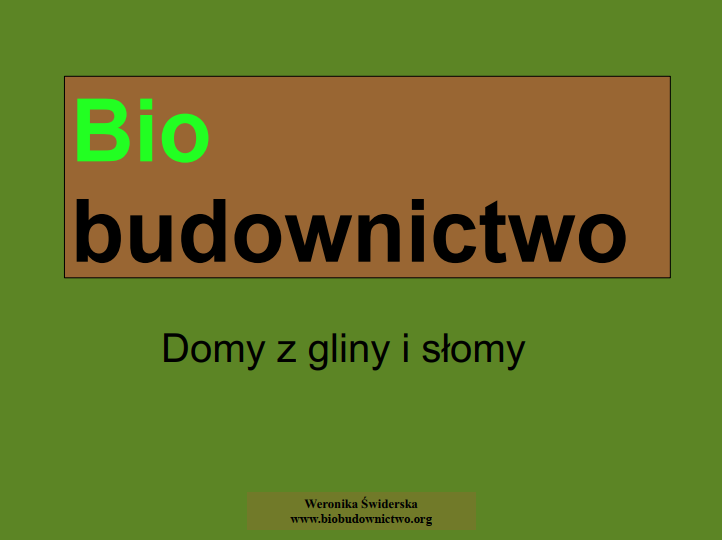 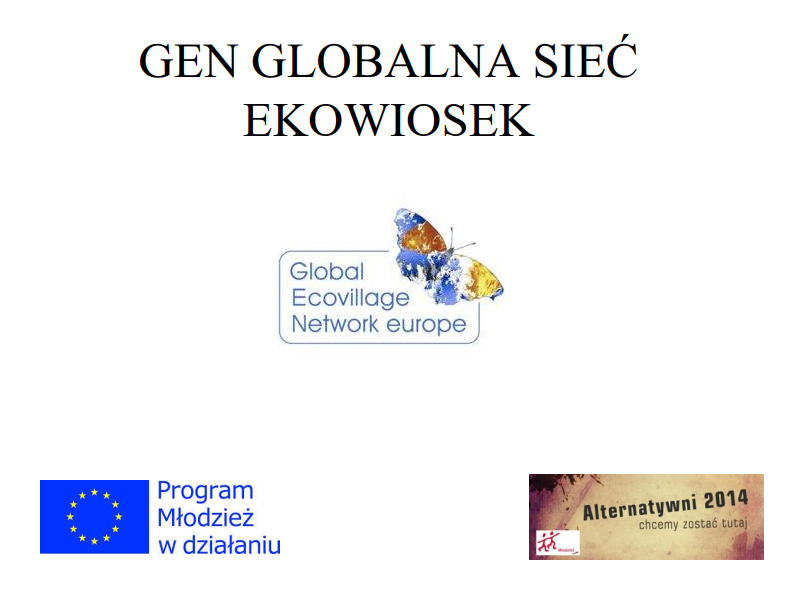 A project „The Alternatives 2014- we want to stay here” is directly addressed to 20 residents of rural municipality Kamionka. The residents are from 16 to 30 years old and they would like to acquire new skills in the field of creating alternative community and protecting cultural as well as biological diversity heritage of our region.

Our initiative group, which consists of six members so far, is a group of volunteers working in affiliation with the Association „For the Earth”. Since our childhood we have been watching the activities of European Global Ecological Network (GEN). We have also been participating in conferences in Poland and in Germany. Now, being inspired with the activities of western ecovillages, we would like to transfer our knowledge to our neighbors and friends. As part of the project, we would like to organize several workshops on ecological issues. The workshops will enable our entry into adulthood and give us both theoretical and practical knowledge and will allow us to permanently stay in our dwelling place. Perhaps we will manage to create here, in our Polish province and away from major city centers, a center that would work in affiliation with our supporting association. The center would be modeled on COHABITAT in Łódź. People interested in modern, nature-friendly technologies would come here from all around Poland. We are thinking of organizing workshops on straw bale and clay plastering, building on tree stumps, building biological sevage treatment plants, about permaculture, rainwater recovery, and building simple solar installations. We also think about workshops on peaceful conflict resolution or on ecotourism. As part of the project, we would like to create a permaculture garden on the grounds of school affiliated with a refugee center in Łuków. The project is expected to continue from March to October 2014 and it would take place in our municipality. As part of the project we would like to organize for the participants a study tour to a center of alternative technologies International Coalition To Protect The Polish Countryside (ICPPC) in Stryszów near Kraków.

We are a youth group called SZUM and we are affiliated with the Association „For the Earth” (our supporting association) which has been acting locally in the area of our municipality since 1995. Since 1998 the association is a member of GEN, an organization registered in Brussels, which brings together ecovillages and alternative communities from the area of our continent and from Africa. In 2000 the association took the initiative to organize a Polish network of Rural Active Communities. The members of the network are communities from different parts of Poland, who promote eco-friendly lifestyle and cohabitation (ECEAT from Stryszów, The Interplanetary Realm of Art in Wolimierz, Ewa and Peter Stratenwerth’s farm in Grzybów, Bożewo near Płock). When we were very young, in 2004-2005, we carried out a project „Artistic and Drama Club- Our Way to Make Our Dreams Come True” as part of The Youth Initiatives. In the project participated us the volunteers and the youth from Wolimierz near Jelenia Góra, also affiliated with Rural Active Communities. As part of the project we have visited the ecovillage ZEGG near Berlin and we have watched what life in such community is about and how it looks from inside. Next, we have participated in GEN Europe Meetings in Poland. We were inspired by the meetings but we still had our studies and education ahead. At that time we organized two volunteer camps in our municipality: one with the help of Association „One World” from Poznań, the second with the help of Civil Service International from Holland. During the camps we were watching how people in different parts of Europe manage to combine ecology with everyday life, what ideas they have, where they get their inspiration from. We haven’t carried out a project like the one we describe here yet but we have had this idea for many many months now. Our partnership organization has been working with refugees since 2009, in close cooperation with the Office for Foreigners. We as the volunteers have been helping with the actions concerning refugee children since 2010.

We have started volunteering for the children and the youth living in Łuków, in a Refugee Center. We have also joined yet another project of the Association „For the Earth” titled „Our Kite Vertigo”. In April, as part of this project, our coach Natalia Jarosz and our teacher Ms Halina Sekita- Waltz from Primary School No. 5 in Łuków have held kite building workshops for Polish and refugee children. We will also build kites with the children from the Center and we will help in organizing a Kite Festival, which will take place in Łuków on May 23rd, as part of Days of Łuków.

April/May creating a permaculture garden on the grounds of Primary School No. 5 in Łuków, to which attend almost one hundred children from the nearby Refugee Center. We have already received a permission from the school authorities and after the Holidays we are starting with our works. http://www.sp5.lukow.pl

The end of May- a workshop „Communication in Group”. The workshop aims at developing skills (and joy) of working in a group. Thanks to a better understanding of communication the participants will have greater freedom and efficiency in performing joint tasks. They will also be prepared to a proper reaction in accordance with dynamics of a group, thanks to which they will be able to meet the challenges such as conflict or difference of opinions. They will learn how to build a good atmosphere favoring both work and establishing positive relations among group members.

Patrycja Bielak- certified trainer of Nonviolent Communication, with which she first came across in 2006. By that time she already had had several years of experience in working with a group as a titled drama instructor. Still, NVC took her practice on another level. She got her advanced trainer skills from PhD Elizabeth English (UK) and PhD Miki Kashtan (USA) and while working with a Warsaw Group TROP. In her trainer practice she makes use of NVC Dance Floors by Gina Lawrie and Bridget Belgrave as well as Mindfulness by Jon Kabat-Zinna. In 2011 she created an Academy of Communication- a programme developing skills in holding group classes in NVC spirit. She works with non-governmental organizations and private sector- both abroad, throughout Poland and in her hometown Lublin. She cooperates among others with Miracle Workers Agency in Great Britain, Castorama Poland and Private Primary School „The Wings” in Lublin. She helps caregivers and families of elderly people in communication. She has trained over 2000 customer service workers in the field of „anger management”. She regularly holds workshops that develop intercommunication skills for teachers. She is currently in the process of writing her doctoral dissertation on Maria Curie-Skłodowska University in Lublin.

We have started our action with experimental works on office walls of the supporting association „For the Earth”. We experiment and we try plastering on our own, however we are looking for specialists who could tell us some secrets concerning their work. We carry on conversations with different specialists and we hope that we will be able to carry out the workshop soon. Here are the effects of our work (photos of applying plaster).

From 6th to 7th of May, as part of the project „The Alternatives”, the permaculture workshops took place in Bratnik and in Primary School in Łuków. The workshops were held by Magdalena Zielezińska from Pracownia Ekomotywa (an organization that promotes ecological lifestyle) and by Robert Błaszczyk.

A mini herb garden was made near the Primary School No.5. All the children from the school will take care of it. The interest was huge, almost every student wanted to participate in these workshops!